Monocacy Cemetery is located along Rt. 28 in Beallsville, Montgomery County, Maryland. With its rich history and rolling grounds, it is a beautiful and peaceful resting place for many of Upper Montgomery County citizens, dating as far back in records as 1752.

The cemetery’s earliest graves are located in close proximity to the chapel, reflective of the early custom of burying the dead in small churchyards close to church structures. Many of the early graves are of the distinctive red Seneca sandstone found in this region of Maryland and date to the 1820s and 1830s. The flat, tablet-style grave markers with low-relief carving exhibits the quality workmanship of early American craftsman.

A focal point of the cemetery is the Monocacy Chapel, which was built in 1915 by the E.V. White Chapter of the United Daughters of the Confederacy to replace an earlier chapel. Built sometime between 1734 and 1747, the original chapel at the site was a chapel of ease for early Anglican parishioners. A second chapel on the site was built circa 1760. During the Civil War, Union soldiers reportedly used this chapel as a stable for their horses and destroyed it beyond repair. In 1874, the Monocacy Cemetery Society took over the operation of the cemetery.

A large stone slab memorial dedicated to Confederate soldiers buried in the cemetery sits nearby the chapel. The current marker is a replacement for the original, but rests on a portion of the original stone. The stone contains the following inscription, “In Loving memory of the valor and self-sacrifice of the Maryland soldiers in the Confederate Army whose names are inscribed heron,” and lists 32 soldiers. The original memorial marker was erected by the Ladies of Old Medley’s District, Montgomery County in 1911 and replaced by the Ladies Auxiliary of Monocacy in 1975. Both the marker and the chapel are examples of the work of women’s organizations that proliferated across the country in the post-bellum period.

To the north and west of the chapel is a high concentration of mid- and late-nineteenth century graves. These graves exemplify the “rural” cemetery movement. During the Victorian era, cemetery designers incorporated picturesque landscapes and family burial plots with a wide variety of decorative and statuesque grave markers in a reflection of American’s growing sentimental attitude towards death and increased reverence for nature. The Monocacy Cemetery reflects this movement in its overall design with sloping hills, winding paths, numerous trees, and ornamental landscaping. Large family burial plots feature vertical forms, such as columns and obelisks. Graves featuring sentimental carved figures, such as lambs and angels, were also common in this era. Monocacy Cemetery has an excellent example of a large carved stone angel that marks the grave of Arthur Nicholson. Other features found in the cemetery include plot-defining barriers, such as short, cast iron fences, and low marble walls.

In the early twentieth century, cemetery design shifted from the romantic picturesque to the more orderly designs of perpetual care lawn cemeteries. This period of cemetery design deemphasized monuments in favor of unbroken lawn scenery and regularity. Management of cemeteries shifted from plots sold to private owners to maintain according to individual taste to sponsoring institutes, such as the Monocacy Cemetery Company, that could extend perpetual care to every lot and grave. The result was a smoother landscaping, which was easier to maintain.

The priority of Monocacy Cemetery is to maintain a welcoming environment to the community. Great efforts have been taken recently to improve the grounds, clean and restore grave markers, and to provide family genealogy resources to our visitors.

Through the valuable website, FindaGrave.com, every grave has now been identified and placed on the Internet.

All military veterans have been added to a database so their burial sites are mapped and can be easily located when flags are placed on Memorial Day and Veteran’s Day.

Monocacy Cemetery encourages the community to remember the history of this portion of Montgomery County and those who created it. The legacies of the people buried here continue to thrive in the community they built.

The Monocacy Cemetery Company strives to provide a peaceful environment in which persons may grieve and reflect upon their departed loved ones, as well as a staff that provides high-quality cemetery services.

The Monocacy Cemetery Company was established in 1874. The organization is led by an all-volunteer Board of Directors. The Board meets annually to conduct business and to review and establish policies to successfully maintain and operate the cemetery. A special meeting is held in April and the public is welcome to attend.

Monocacy Cemetery is a registered non-profit Maryland corporation, officially designated as a 501(c)(13) by the U.S. Internal Revenue Service. Its sources of revenue are sales of grave sites and fees associated with burials. Grants and donations are also an important source of revenue.

President Kennedy appointed him U.S. Postmaster General in 1961. During his tenure, he implemented the ZIP code and worked to eliminate the circulation of pornography through the mail. Day was known for his wit and after leaving office in 1963 he published several memoirs and a work of fiction in addition to practicing law. The Association for Postal Commerce’s “J. Edward Day Award” is named for him.
(Row L, Lot 27 Upper, Site 4)

Dr. Elgin was a pioneer in the development of smallpox vaccines and was credited with much of the progress in the reduction of deaths due to smallpox.
(Row C, Lot 24, Site 4)

Circuit Judge Charles W. Woodward, who made the appointment, said Mrs. Gray was the first woman grand jury foreman in the history of Maryland and perhaps the United States.
(Row G, Lot 1, Site 9)

Democratic member of the Maryland House of Delegates and former president of the Board of Montgomery County Commissioners
(Section M, Lot 18, Site 4) 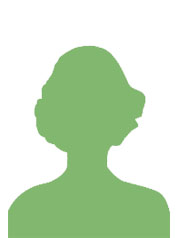 Mrs. Jeffers was employed by the National Institutes of Health in the Department of Finance, retiring at the age of 70 in 1973. She was a World War II Gold Star Mother. She served as Town Clerk of Barnesville for 40 years (1953-1993) and was widely recognized as the oldest public servant in the country. She was a member of the Maryland Municipal League, American Legion and Comus Homemakers Club. She had received awards for outstanding service from the Maryland Municipal Clerks Association, the town of Barnesville and was honored at a luncheon at the Maryland Governor’s House
(Row B, Lot 44 Upper, Site 3)

He served in the 1st Virginia Cavalry, Company K until joining the new 1st Regiment, Maryland Cavalry, Company A (Confederate Army) on May 15, 1862, as a Private, under Lt. Col. Ridgely Brown though he does not appear on the muster rolls. (Also listed as having served in 35th Bat. Virginia Cavalry, but not on their muster rolls either.) Served as Courier for Capt. Philip Henry Lee. He was the only Civil War soldier buried at Monocacy Cemetery who actually died during the Civil War —at the age of 20 years old— of typhoid fever in “The Valley of Virginia”.
(Row F, Lot 3, Site 4)

A Navy combat photographer whose images of World War II have appeared in documentaries that helped shape collective memory of the war, and who later served as a special assistant to presidents John F. Kennedy and Lyndon B. Johnson.
(Row M, Lot 35 Upper, Site 2)

After service with the Army Air Corps in World War II he studied marine biology at the Scripps Institution of Oceanography. He followed his interests in the natural sciences, journalism, and photography with jobs at the California Academy of Sciences Steinhart Aquarium, the San Rafael Independent Journal, a year in Afghanistan with the United Nations FAO, and as director of the San Mateo County Junior Museum.

In 1955 he moved to Washington D.C. where he worked for the National Geographic. From 1961 to 1980 Woody settled into a career as photographer for the National Park Service. During this time he was “one of the pioneers in opening the public eye to the last of the great and little known scenic areas of North America,” including the newly designated parks in Alaska. A portfolio of his photos was presented to the Mellon and Rockefeller families and to China’s Chairman Mao Tse-tung by President Nixon in 1972.
(Row M, Lot 7 Lower, Site 2A) 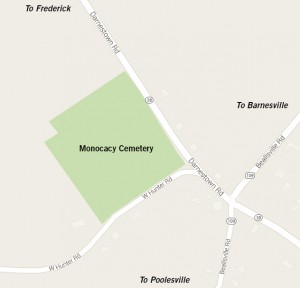 Monocacy Cemetery would like to acknowledge the support of the following organizations that have provided support and guidance:

If you would like to become more involved with Monocacy Cemetery, here are some current opportunities. You may wish volunteer yourself or your organization.

Your donation will be put to good use.

All donations to Monocacy Cemetery are tax deductible. Use our mailing address to submit your donation by check. In-kind donations are also gratefully accepted.

Each memorial on FindaGrave displays a burial location at the bottom.  Use our Monocacy Cemetery Site Map to locate them within the cemetery.